God’s Word for Women: Rise Up! 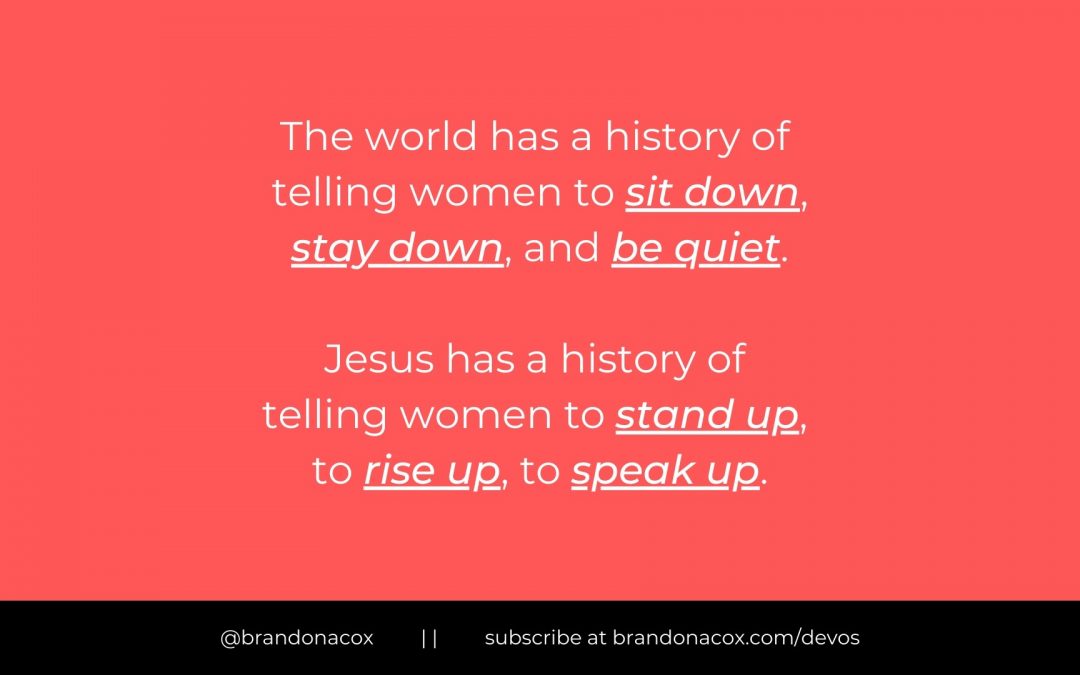 The world has had a bit of a history telling women to sit down. To stay quiet. To stay in their place.

Jesus has a history of telling women to stand up, to rise up, to speak up.

When the woman who touched the hem of his garment to receive healing for her bleeding issue tried to sneak away, Jesus didn’t let her. Instead, he called attention to her.

Then the woman, seeing that she could not go unnoticed, came trembling and fell at his feet. In the presence of all the people, she told why she had touched him and how she had been instantly healed. Then he said to her, “Daughter, your faith has healed you. Go in peace.”

Jesus could have let her go. He could have simply blessed her quietly and secretly. But instead, he calls her out so that she proclaims the miracle she’d received in front of the watching crowd. Jesus was simply doing what Jesus often did.

When Jesus was still a baby, the scripture records the words of a prophetess named Anna, who proclaimed the goodness of God about Jesus’ arrival.

When he encountered the woman at the well (John 4), he not only shared truth with her, he also asked her questions, which required a verbal response, which was very much against the rules of the culture of the time.

When Jesus was asked by the Syrophoenician woman (Mark 7:24-30) to cast a demon out of her daughter, Jesus posed a bit of a trick question to her. He then praised her verbal response as greater than the faith he’d seen in Israel.

When Jesus rose from the dead, the women were the first to arrive at the empty tomb and an angel commissioned them to carry the good news back to the other disciples.

Jesus’ tendency was always to find ways to empower women to rise up and speak up, even when surrounded by a culture that would assign them a less influential place in the order of things.

But that’s like Jesus, isn’t it? Upsetting the order of the world with dynamic and revolutionary kingdom principles.