The Power of Flexibility in Ministry Leadership 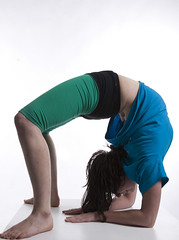 Last year we bought a Nintento Wii and then later, a Wii Fit thingie designed to utterly humiliate me! It sighs when I step on the scale, mocks me for not showing up in xx# of days, and loves to point out how many Yoga moves I can’t do because… I’m inflexible!

But in leadership, I’m quite the opposite. I love and respond to flexibility. What I mean by that is, I love the freedom of trying things and failing, and knowing that failure is ultimately okay. I remember Rick Warren once saying that for everything Saddleback Church had succeeded in doing, there were twenty experiments at which they had failed.

For me, and for others like me, inflexibility is rather difficult. So when people around me huff, puff, and moan every time something doesn’t go right, I feel stifled.

I’m reminded of what the Apostle Paul wrote in 1 Corinthians 9:22, “To the weak I became as weak, that I might gain the weak: I am made all things to all men, that I might by all means save some.” Paul, I think, was rather flexible when it came to acclimating to His surrounding culture.

For the gospel’s sake, and for the success of your organization…

If necessary, buy a Wii. It does a body good.