Thanks to the Churches of the Baptist Missionary Association of America 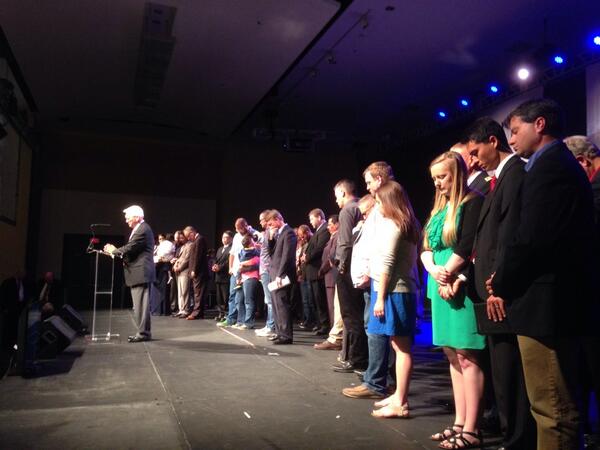 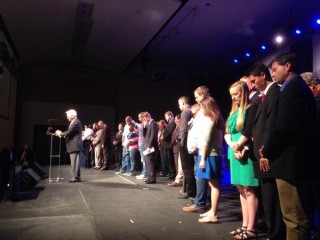 Grady Higgs, a mentor and friend, praying over 13 new missionaries being commissioned.

I’ve just returned from Little Rock where the Baptist Missionary Association of America had its annual meeting. With the exception of the one year I spent at Saddleback Church, I’ve pastored churches associated with the BMA since I was 19 years old and I attended Central Baptist College, a BMA college (one of the best liberal arts colleges on the planet, by the way).

Many of my close friends are associated with other denominations and still others don’t like the very idea of denominations, but personally I’m attached for some good reasons. I wanted to offer up an explanation about why I’m so thankful and enthusiastic to be part of this great group of churches.

1. We love Jesus together. One of the quotes I tweeted from the meeting was from the report of the BMA Seminary by Dr. Charley Holmes who proclaimed, “If we want to change the world, we need Christ-centered preaching, Christ-centered worship, and Christ-centered discipleship.” I’m all for the supremacy of Jesus Christ in all things and I love that He takes center stage.

2. We trust God’s Word together. We’ve never needed a conservative resurgence (a movement I was thankful to see in the SBC) because, from day one, the BMA has been an association of churches bound by a common belief that the Bible is absolutely God’s inspired, inerrant, infallible Word. We can celebrate a diversity of methodologies and approaches to communicating the gospel while affirming that there is indeed only one gospel – the story of Jesus’ death, burial and resurrection so that we might be justified by grace through faith in Him.

As John David Smith said in his message at the Pastors’ Conference, “Church multiplication trumps church additions every day. And the local church is the instrument for getting it done.”

I’m convinced that church planting and multiplication has been the ideal way of taking the gospel to every people group for twenty centuries now. So it’s a blessing to me that Grace Hills gets to send BJ & Jill Sanders to Papua New Guinea and Michael Smith to Siloam Springs, Arkansas to plant churches that will be part of this great movement as well as supporting other churches in sponsoring other plants in Thailand, in Nixa, Missouri, and dozens of other places.

4. The BMAA has helped Grace Hills Church to be born. Clif Johnson and Garrett Memorial Baptist Church has been our sponsoring church in the BMA and has invested more than we could ask into our planting process. Other churches in the BMA have chipped in too in addition to what the Missions Department has contributed. I’m humbled by that. What a trust. What an honor. It further motivates me to pay it forward and to keep investing in missions until everyone is reached who will ever be reached.

And beyond this financial investment, I am coached very well and regularly by my personal coach, Danny Kirk, who has had a hefty part of helping organize every major decision I’ve faced as a church planter so far.

5. We’re getting creative together. One of the goals I was able to share during Lifeword’s presentation was the task of helping churches more effectively share the gospel using social media. I’ve already been approached by leaders in five states asking for help in the area of creative and social media and I look forward to seeing how that transpires.

I’m glad for this family of fellow believers and missionaries and I’m praying for our collective, collaborative growth. May God’s Spirit continue to fuel a movement of people sharing the good news to the ends of the earth!