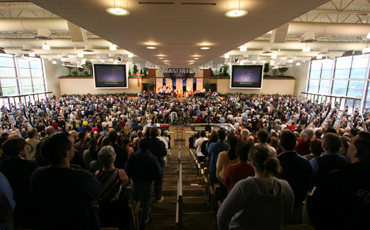 It’s a funny thing. Since we’ve announced that we’ll be planting a new church in cooperation with the new Saddleback Network and that Rick Warren has endorsed and sent us, I’ve gotten quite a few questions about the controversy over “chrislam.” I’m not going to link to any articles – Google tells the story, and it’s a sad and frustrating one.

The rumor is that Rick Warren and other prominent religious leaders are promoting a new belief system known as chrislam, which is a kind of twisted entangling of Christianity and Islam. Let me make a few things clear…

1. Rick Warren affirms that Jesus Christ is the only way to be saved for eternity. Here’s what Rick says about the issue: “If you can be saved without Christ, missions is a crock. We’re better off not to go.” This is from a recent interview between John Piper and Rick Warren in which Rick had an opportunity to set the record straight on a number of issues.

2. That Saddleback is involved in “chrislam” is crazy. The church hasn’t removed any crosses from the property. They haven’t put Koran’s in the pews (they don’t even have pews). They don’t teach from any Islamic religious traditions. In fact, Rick and the church affirm that we must be more clear than ever before that Jesus Christ is the only way to heaven in light of an increasingly pluralistic society.

3. “Mature” Christians should really be more discerning. It’s funny how often I hear Christian leaders encourage believers to be more “discerning” about doctrinal error and how we should be “exposing” false teaching. I agree (and so does Rick Warren), but what’s sad is that there doesn’t seem to be any expectation that mature believers should be equally discerning about malicious, unfounded gossip. If our favorite guy on the radio or television quotes a verse and slams a leader, it must be true. Sadly, plenty of believers continue to quickly latch onto the latest hype over guys like Rick Warren, and I believe it grieves the Holy Spirit and breaks the heart of Jesus who has to watch His own body divide in this way.

If you’ve spread the “chrislam” rumor, or any one of hundreds like it, not only about Rick Warren, but about any other Christian leader, here’s my advice:

You have no idea just how forgiving Rick is, and this is because of his understanding of just how forgiving Jesus is. If you’ve ever watched a depiction of the trials of Jesus, you’ve felt what I’ve felt. Why didn’t He just defend Himself? Why didn’t He set the record straight and beat the dog-snot out of those false accusers? I’ve often felt the same about Rick. But at the end of the day, there’s a greater goal to be accomplished. I’m proud of Pastor Warren for deciding to spend his time and attention on the spreading of the gospel for the redemption of the nations rather than defending himself against every false accusation.

Make no mistake, Rick Warren loves Muslims deeply!! If you don’t, you have a problem with Jesus who loves Muslims even more than Rick does.

If you’ve been the center of unfair criticism, consider yourself blessed to be so identified with Jesus. And if you’ve handed out the criticism? Thank God that Jesus died to fully and completely forgive you and to grant you His smile when you trust Him!