The Rare and Valuable Gift of Gratitude 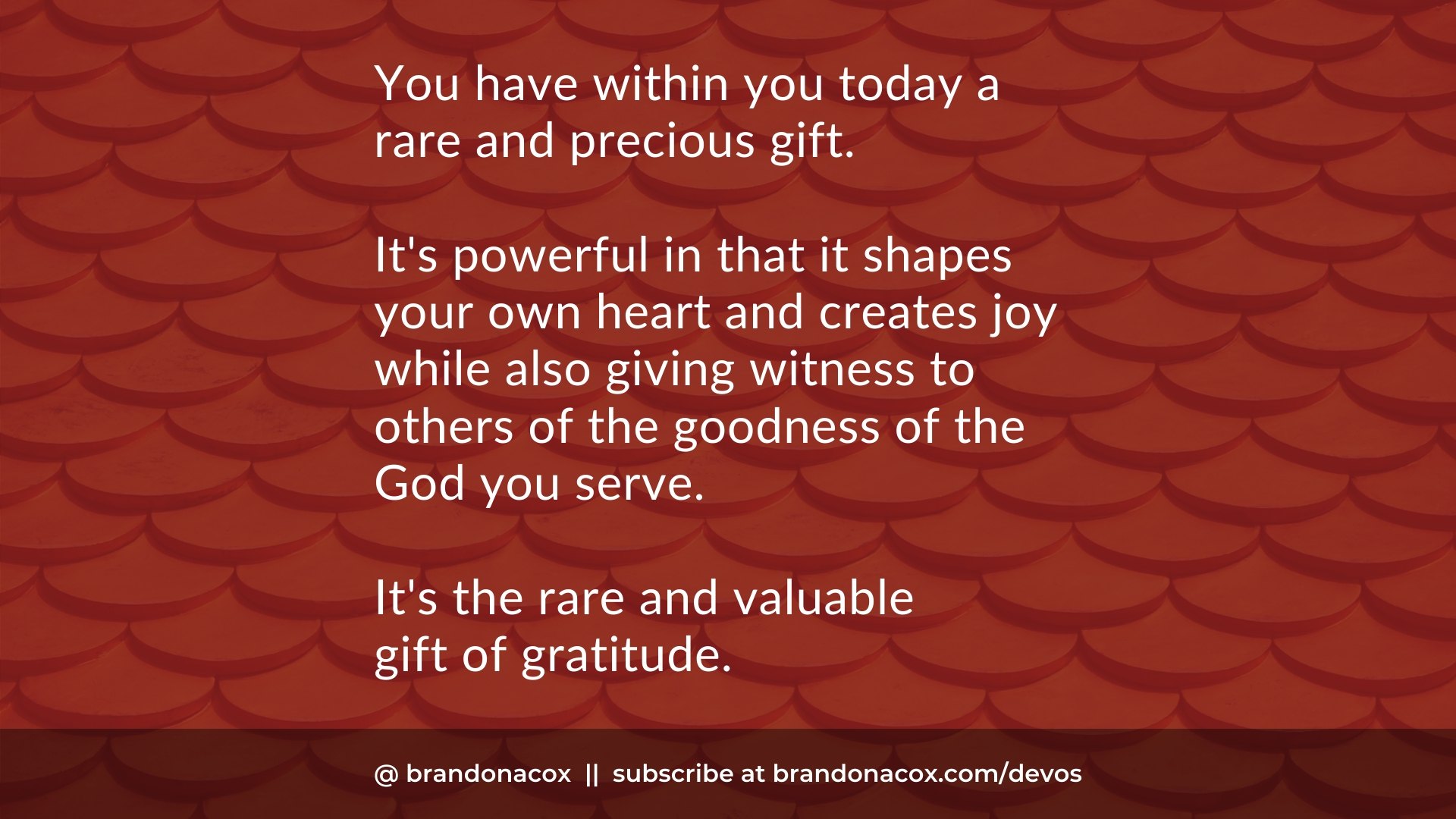 Researchers agree with what has been written in scripture for two thousand years – gratitude is powerful! Expressing thanks actually releases endorphins in our brains that cause us to feel happiness.

One of the most valuable practices you can get into is the habit of expressing, out loud, thanks to God for at least three things that happened to you during the day. It changes the way you sleep and it prepares you for a better tomorrow.

[bctt tweet=”Expressing, out loud, thanks to God for at least three things that happened to you durin the day changes the way you sleep and prepares you for a better tomorrow. ” username=”brandonacox”]

And when you wake up in the morning, you get to thank God in advance for keeping every promise in his Word for your life. And of course, this changes the way you live through your day.

The funny thing about gratitude is that, while it’s one of the most powerful forces in the human heart, so few of us practice it regularly. We stay in negative, defensive mode, ready for something to go wrong and looking for something to complain about.

Now on his way to Jerusalem, Jesus traveled along the border between Samaria and Galilee. As he was going into a village, ten men who had leprosy met him. They stood at a distance and called out in a loud voice, “Jesus, Master, have pity on us!”

When he saw them, he said, “Go, show yourselves to the priests.” And as they went, they were cleansed.

One of them, when he saw he was healed, came back, praising God in a loud voice. He threw himself at Jesus’ feet and thanked him—and he was a Samaritan.

Jesus asked, “Were not all ten cleansed? Where are the other nine? Has no one returned to give praise to God except this foreigner?” Then he said to him, “Rise and go; your faith has made you well.”

Jesus was probably making several points concerning the assumptions we make about others. In this case, he pointed out that the one who returned to give thanks happened to be a Samaritan, the object of scorn and racist anger among the Jews at the time. But all of that aside, as the old kids’ song says, only one came back.

You have within you today a rare and precious gift. It’s powerful in that it shapes your own heart and creates joy while also giving witness to others of the goodness of the God you serve. It’s the rare and valuable gift of gratitude.

And right now, you can show as much of it as you want.