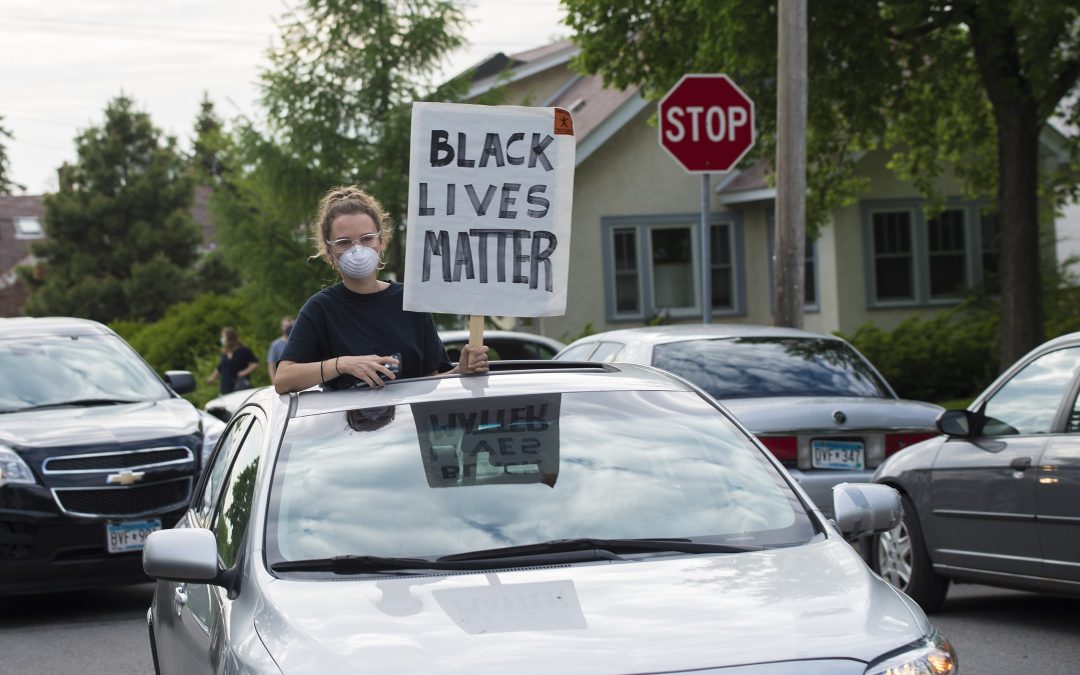 Yesterday, video was released of George Floyd dying, needlessly, with his neck pressed to the ground under the knee of a police officer. That knee was on George’s neck for over seven minutes while he cried out for help, told officers he was in pain, and tried to express that he couldn’t breathe.

A couple of weeks before, Ahmaud Arbery was murdered in the street by armed white vigilantes for the crime of running down the street while black.

When these things happen, social media erupts with outrage. People express shock and anger and heartbreak. Black people, in particular, give words to their fears that the next viral video might be of them or of one of their children just for jogging at night or being black in the wrong neighborhood.

I find myself burdened by how often we walk through this particular pain as a society, but what burdens me even more deeply is the defensiveness with which so many white people react.

We want to make sure nobody makes it about race unless the offender specifically used a racial slur during the act of murder. After all, racism hasn’t existed since slavery ended and the Civil Rights Act was eventually passed, right? At least it’s relegated to those far off distant little rural places where people still join the KKK and wear their hoods to nighttime rallies in the woods. Or so we’d like to believe.

We want to wait for all the facts. After all, he was probably resisting arrest, disobeying commands, and causing trouble. He could have even been intoxicated or high on drugs. Probably had a criminal record. In other words… maybe he wasn’t as worthy of life as someone who looks less guilty.

I have to hold back tears when I deliver “the talk” that every black parent has with their children. The talk is our way of preparing our children for what it means to live in America today.

In my white family, we dread the sex talk, the talk on how to handle a playground bully, and maybe the talk about college and career. But we don’t have the talk where you warn your child not to do anything, anywhere, at any time, that might make them seem guilty of anything at all – like jogging in a white neighborhood or walking down the street in a hoodie with skittles in their pocket – or else they may be falsely accused, arrested, or executed on the spot.

In other words, by virtue of my being white, there are certain privileges I enjoy that my black friends don’t enjoy. That’s what white privilege is. It doesn’t mean white people don’t work hard or struggle. It simply means that, on the whole, black people start out in life with a certain level of disadvantage because entire systems have been built around the protection and advancement of those who are privileged.

We think of the concept of white privilege as personally insulting and respond with the story of how we came from nothing, worked our way up, and were never handed anything. But that’s not what white privilege is about. It doesn’t mean that any one white person is individually or uniquely responsible for racism. And it doesn’t mean any white person is successful solely because they are white.

It simply means that people of color face a harder road because of centuries and generations of prejudice and systemic racism, and until we are willing to acknowledge it, we can’t change it. And we definitely need to change some things.

When we stop being defensive, we can then do the three things that really matter.

Every time I talk about this, I get comments or messages from people hoping to enlighten and inform me that I’ve merely bought into the narrative created by the mainstream media or the political left. Don’t go to the trouble.

I’ve heard all the talking points about how media uses “race-baiting” to create false outrage. I’ve seen the statements published by Christian groups on how social justice and the gospel are supposed to be incompatible. I’ve heard all of the whataboutism and the stats on “black-on-black crime.”

I’ve considered those talking points, I’ve weighed them in the balances, and I’ve found them wanting. Racism is real and it’s prevalent. Our systems absolutely were designed to keep white people in power and it doesn’t take a lot of digging to find the evidence of it.

And I’m asking God to continue to strip me of my pride and defensiveness and to give me an empathetic, compassionate heart that listens to the pain in the voices of those suffering under the tyranny of fear. All I want is to invite you to join me.

Join me in being quick to listen to those who have experienced racism first-hand, slow to speak rebuttals, and slow to get defensive or angry. In our culture, we’re experiencing the slow death of empathy. Let’s reverse that trend. Listen and love and lay down your defensive arguments.

I keep hearing from my black friends that they’re just tired. Exhausted. Worn out and burned out on saying the same things over and over and never being heard. I don’t blame them, and I don’t think it’s too much to ask that we just lend a listening ear and helping hand.