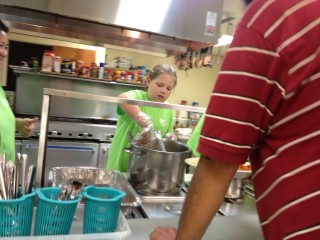 My ten-year-old, making an actual difference, without even having a Facebook account even though she’s begging for one.

Ranting and raving on Facebook about how the immoral, evil, liberal, leftist, socialists have taken over and will be the demise of our country doesn’t equate to you “standing up for what is right” or “making a difference.” It means you can type. Congrats.

I understand posting about issues you feel strongly about and have no problem with anyone who expresses their beliefs publicly. But when you get hateful, think about how your tone reflects on what you say you believe (or WHOM you say you believe in).

It’s easier to curse welfare than to help serve a meal at a local homeless shelter or mentor a young person toward success. It’s easier to hold up a sign about abortion being murder than to befriend someone experiencing the panic of an unexpected pregnancy with no one there offering to help if they choose life over death. It’s easier to shout about liberal fiscal spending than to curtail our own out-of-control consumer materialism and credit card craziness.

Maybe we need less ranting, which is easy, and more of the hard stuff. Then again, stooping to serve doesn’t feed my need to feel powerful nearly as well.