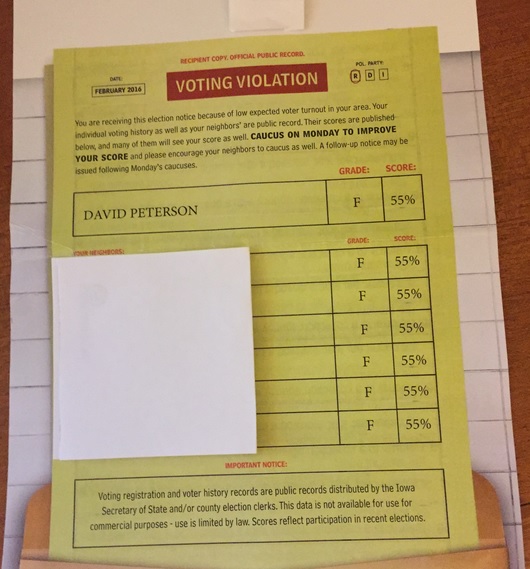 Cruz doesn’t see it as a mishap, and “won’t apologize” for it. But as a leader and church communications guy, I think he blew it when he used a direct mail piece designed to apply social pressure to potential voters in Iowa.

In case you haven’t seen it, here’s a picture of the mailer the Cruz for President Campaign sent to Iowa voters in an attempt to get more of their constituents to caucus. And credit for the photo and plenty of background information about it goes to this article on The New Yorker’s site.

This isn’t a political statement. It’s a lesson in communications, especially in our social media-savvy world that demands more authenticity and transparency than ever before. To Mr. Cruz and anyone else running for office, welcome to campaigning in the trust economy. (To make this point even clearer, there is plenty of dishonest marketing to pick on within most political campaigns. Ted just happens to be publicly defending this as a good move…)

Here’s my assessment… This was dumb. It might have worked. It might have gotten more votes out. But it’s bad marketing mojo. It’s spam, sent snail mail. It’s not relational or conversational. It’s just bad form. And it’s the kind of scare tactic that will win the short term payoff of more votes, but cost the trust of the voters in the long run. Just a few observations, from a communications standpoint, especially for church leaders and church communicators…

1. Scare tactics and shock value are great for short term response, but cost us the trust of our followers in the long term.

2. Trust is the currency of effective leadership. Never throw this currency away on short term tactics. Ever.

3. The end does not always justify the means. It’s very possible to lose, even when we win, in terms of having genuine, committed followers.

4. People only follow leaders who have racked up some “trust equity” by making decisions with repetitive and consistent integrity.

Again, I’m not claiming Cruz isn’t a man of integrity. I am saying, however, that this particular marketing decision doesn’t reflect honesty and transparency. Rather, it reflects a willingness to manipulate constituents for a desired end through questionable means.

The lessons for church communicators are fairly clear. People who respond to shock-value-based messaging usually don’t stick, and they usually leave with a bad taste in their mouths. Not all results are created equal. It’s better to get permission than forgiveness in the world of direct marketing and promotional communication. And it’s always best to be ultra-clear, honest, and personal in our communication efforts.

There’s too much at stake for church leaders and communicators to rely on tactics that may very well bring the integrity of our gospel ministry into question.